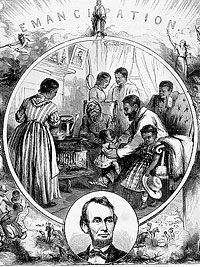 Is the “Black” vote relevant to a nation built on lies and deception?

What is the point of voting when the deck has obviously been stacked against people of indigenous descent? Black, Brown and Yellow people of this United States Corporation have no voice, never did…but that’s my opinion…what do you think?

Congress once again is taking the so-called bulls by the horns to make sure the voices that should be heard are not.

To former abolitionists and to the Radical Republicans in Congress who fashioned Reconstruction after the Civil War, the 15th amendment, enacted in 1870, appeared to signify the fulfillment of all promises to African-Americans. Set free by the 13th amendment, with citizenship guaranteed by the 14th amendment, black males were given the vote by the 15th amendment. From that point on, the freedmen were generally expected to fend for themselves. In retrospect, it can be seen that the 15th amendment was in reality only the beginning of a struggle for equality that would continue for more than a century before African-Americans could begin to participate fully in American public and civic life.

Jim Crow Laws began their tricks and games were played to disenfranchise African-Americans from being able to vote. Literacy tests, poll taxes and just plain out-and-out not allowing them into the voting houses were tactics used and successfully so to keep Blacks from voting.

Back to the 13th Amendment there has always been the question as to whether or not it had been ratified, meaning were those held as slaves in the southern states actually free?

The 13th amendment was passed at the end of the Civil War before the Southern states had been restored to the Union and should have easily passed the Congress. Although the Senate passed it in April 1864, the House did not. At that point, Lincoln took an active role to ensure passage through congress. He insisted that passage of the 13th amendment be added to the Republican Party platform for the upcoming Presidential elections. His efforts met with success when the House passed the bill in January 1865 with a vote of 119–56. 13th Amendment to the U.S. Constitution: Abolition of Slavery (1865) 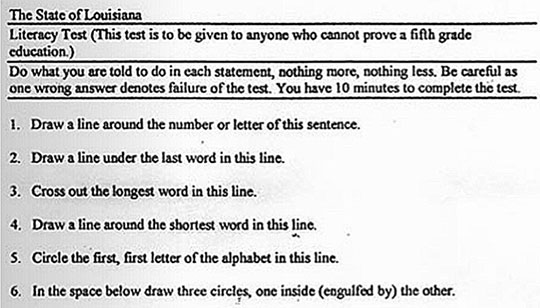 Florida passed a law that restricts voter registration and made cuts to early voting. The majority of African-Americans in Florida rely on early voting to cast a ballot, and register to vote through community based registration.

Under the VRA, the DOJ blocked South Carolina’s voter ID law, saying it discriminates against minority voters. The DC federal district court later precleared the lawbut only because the state agreed that an ID was not required for voting.

The ACLU represented the NAACP’s Alabama chapter in Shelby v. Holder. In the decision, the Supreme Court crippled one of the most effective protections for the right to vote by rendering ineffective the requirement that certain jurisdictions with a history of voting discrimination get pre-approval for voting changes. States have wasted no time enacting potentially discriminatory laws including Texas, Mississippi, North Carolina, Florida, Virginia, South Dakota, Iowa, and Indiana.

The good news is that we have the chance to fix it now. Congress can pass a new, flexible and forward-looking set of protections that work together to guarantee our right to vote — and it’s not just wishful thinking. Since 2006, Congress extended the key sections of the Voting Rights Act on four occasions in overwhelming, bipartisan votes. Once again, a bipartisan group of lawmakers have come together to work on these critical protections

In January 2014, a bipartisan group of lawmakers introduced the Voting Rights Amendment Act to repair the damage done by the Shelby decision. Congress can pass a new, flexible and forward-looking set of protections that work together to guarantee our right to vote — and it’s not just wishful thinking. Since 2006, Congress extended the key sections of the Voting Rights Act on four occasions in overwhelming, bipartisan votes. The last three extensions have been signed by Republican presidents. If this is not passed soon, 2014 will be the first election in 50 years without the full protection of the Voting Rights Act for minority voters.

Although we have made significant gains in voting rights, discrimination at the polls persists today and cannot be dismissed as a relic of the past. Minority voters still face significant obstacles in registering to vote and casting ballots. That’s why we need Congress to act decisively, and to act now

References: Timeline: A History of the Voting Rights Act

There are articles by notable authors who ask the question “why bother to vote”? Democracy: Why bother to Vote? From the Observer The Guardian  Why Bother Voting? Psychology Today

From my perspective there are no viable candidates for the general public to seriously consider.  The deck is stacked and has been for a very long time.  Money runs the government and its minions that pretend to be for the people.

As for the “Black” vote there is no one truly interested in righting the humanitarian wrongs of slavery to our people.  It does not benefit the corporations and the banks that rape up daily, year in and year out.  This is my personal opinion and you don’t have to agree or disagree.

Until the masses wakes up and do a deep study on the “factual history” of this country and the fact that this country was initially founded on the principles of a “republic” and turned into a democracy after it was forced into bankruptcy we as a nation will continue to be dominated by liars.

The fact of the matter is, the United States did go “Bankrupt” in 1933 and was declared so by President Roosevelt by Executive Orders 6073, 6102, 6111 and by Executive Order 6260 on March 9, 1933, under the “Trading With The Enemy Act” of October 6, 1917, AS AMENDED by the Emergency Banking Relief Act, 48 Stat 1, Public Law No. 1, which is presently codified at 12 USCA 95a and confirmed at 95b. You can confirm this for yourself by reading it on FindLaw. Thereafter, Congress confirmed the bankruptcy on June 5, 1933, and thereupon impaired the obligations and considerations of contracts through the “Joint Resolution To Suspend The Gold Standard And Abrogate The Gold clause, June 5, 1933” (See: HJR-192, 73rd Congress, 1st Session). When the Courts were called upon to rule on various of the provisions designed to implement and compliment FDR’s Emergency BANKING Relief Act of March 9, 1933, they were all found unconstitutional, so what FDR did was simply stack the “Court’s” with HIS chosen obsequious members of the bench/bar and then sent many of the cases back through and REVERSED the rulings. The Bankruptcy of the United States

HINT: A LOT MORE HAPPENED THAN JUST THE CONFISCATION OF THE PEOPLE’S GOLD!

[The following is excerpted from Judge Dale’s The Great American Adventure – Secrets of America.] The bankruptcy of America 1933

The power the people may yet have lies within their own municipalities, cities and townships.  This is where the power actually lies and if change is to be effective it has to be a grass roots change.