It is amazing to me how uninformed this nation is regarding its own history.  I would venture to say even the populations of”third world” countries have more awareness of their history than we do in the States.

I have come to the conclusion this is a nation of “Eurocentric ideals” that are erroneously misplaced and misguided since their invasion of the American continent.  The real barbarians are the ones who came, saw and slaughtered their way through these lands.  Set up their version of governance and have decimated the people ever since.

Allow me to be more specific; the so-called “founding fathers” of this false government wrote laws, ordinances and statues to protect their own thieving selves.  But we aren’t taught this in the “elite” educational system, set up to keep us dumb down.  The secrets are written for us to see, but we take no thought in researching the lies we live under, we accept their word, we accept their doctrine.  We’ve been trained to follow the rules, but the rules only apply to the little people…and with that we are expected to vote for our oppressors…

What I am about to share with you isn’t news, nor is it new information, it is however ignored because the masses have been well-trained to go along to get along, while we are butt*&^% with no end in sight.  VOTE!!!! for the oppressors to continue their crimes against humanity.  Vote!!!  To keep the oppressors in power and yet the masses keep shouting for change.  That is impossible to have if you continue with the same focus and thought and expect anything different.

The majority of citizens of these United Snakes are clueless to the following, but I hope and pray someone, even one will benefit from this information.

The “missing” 13th Amendment to the Constitution of the United States reads as follows:

“If any citizen of the United States shall accept, claim, receive, or retain any title of nobility or honour, or shall without the consent of Congress, accept and retain any present, pension, office, or emolument of any kind whatever, from any emperor, king, prince, or foreign power, such person shall cease to be a citizen of the United States, and shall be incapable of holding any office of trust or profit under them, or either of them (https://www.linkedin.com/pulse/missing-13th-amendment-found-lawyers-public-office-letennier)

Amazing how the things we need to know and comprehend are lost, forgotten or missing period.  Those ruling the mad house are not supposed to be there in the first place, yet the people continue to fall for the okie-doke every 2-4 years and vote this scum back in to rule over our lives…How can anyone expect these people who are deemed worthy of “ruling” the populus when they themselves are corrupt and break their own laws?  Do you really expect these people to play fairly when they are in cahoots with one another.

An analysis of disclosure filings by the Center for Responsive Politics reveals that while lawmakers like to talk about the plight of poor and middle-class Americans, few of them can relate financially.

How vast is the discrepancy in their fortunes? The median net worth of a member of Congress was $1.03 million in 2013, compared with $56,355 for the average American household. (http://www.nytimes.com/politics/first-draft/2015/01/12/making-it-rain-members-of-congress-are-mostly-millionaires/) article by Robert Rapport

This information is no secret… While much is still not reported accurately, think about it for a minute, these people are not capable of relating to the general populations woes.  I used to cringe when former Speaker of the House John Boehner would say, “The American people”…  Cringed literally!!!

Here’s a chart showing the occupational breakdown of senators over the last seven decades: 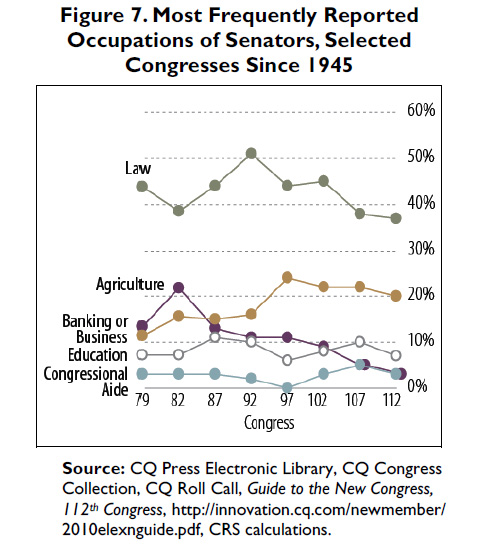 http://economix.blogs.nytimes.com/2012/02/23/first-thing-we-do-lets-elect-all-the-lawyers/
The election process in rigged and its’ rigged by the very people who are voted into office and not by the people, but by the “Electoral College” and that’s another story.
Wake UP!!! Know who’s who and stop playing their game.  Once they figure out we know this is a hoax and a fraud then maybe if the populus grows some gonads we can get the rich, the famous and the liars out of our homes, our businesses and our schools and teach TRUTH! May then we can heal.