I am decreeing with determination and hubris my personal stand to no longer allow government, corporations, people to identify me by colonial standards and lies…  No more!

I make this statement out of great frustration and sadness because this nation has been throughly indoctrinated into a belief system based on solely on lies, misdeeds aka deception amongst other things.

In this 21st century we have been afforded an enormous gift, the “Internet” which allows us to search the records of the ages around the world.   Millions upon millions of documents that were once inaccessible are at our fingertips, university libraries, museums all full of things once hidden now out in the open, yet multitudes of what would be considered intelligent individuals sit in the seat of denial on so many issues.  My primary issue is this false concept of “race” and the ramifications “man-made” assumptions have all but destroyed the legacy of the “Indigenous” Peoples of the world and to my point these “United States” (aka united snakes).

The “so-called” Negro aka “Black and/or African-American” in this country is the only group of Peoples denied their natural right to exist without harm.  Yes we are fully aware of other ethnic groups have been discriminated against because of their appearance, their “religious” beliefs, their language the list goes on and on.  But the legitimate peoples of this continent have been butchered on every leve.  Denied the right to live, to work, to self educate and the list goes on and on.

Are you aware of the story about “Black Wall Street”? 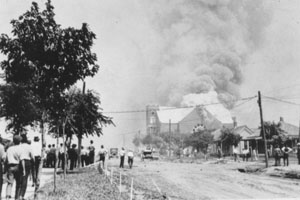 On May 31, 1921, reports circulated around Tulsa that a black elevator operator had attacked a white girl.  As tensions grew, mobs of whites entered the black section of town, an area Booker T. Washington had dubbed “Black Wall Street” because of its economic success, and killed an unknown number of African-Americans. The Destruction of Black Wall street: The Tulsa Riot

“I could see planes circling in mid-air. They grew in number and hummed, darted and dipped low. I could hear something like hail falling upon the top of my office building. Down East Archer, I saw the old Mid-Way hotel on fire, burning from its top, and then another and another and another building began to burn from their top,” wrote Buck Colbert Franklin (1879-1960).
Read more: http://www.smithsonianmag.com/smithsonian-institution/long-lost-manuscript-contains-searing-eyewitness-account-tulsa-race-massacre-1921-180959251/#ke7JkL5oIpqZEsSs.99
Hundreds upon thousands of data available online, in libraries but no one is truly interested in revealing the truth let alone understanding it.

Let’s look at some of the deceitful tricks used to steal the land and its resources from the “indigenous” people of these “Americas”.

Paper genocide began with the census and classification of Peoples from an “Eurocentric” perspective as the colonist and those that followed had clearly beaten down the indigenous people by slavery and out-and-out murder.  If “they” the invaders wanted it they took it. This is the legacy of the Euro-mind set so aptly displayed even to this moment by the so-called representative of the country by Donald J. Trump.

From a technical perspective the word “ethnicity” refers to the “racial ancestry” where as nationality refers to ones country of origin.

When was the First Census in the US taken?

The first census began more than a year after the inauguration of President Washington and shortly before the second session of the first Congress ended. Congress assigned responsibility for the 1790 census to the marshals of the U.S. judicial districts under an act which, with minor modifications and extensions, governed census taking through 1840. The law required that every household be visited, that completed census schedules be posted in “two of the most public places within [each jurisdiction], there to remain for the inspection of all concerned…” and that “the aggregate amount of each description of persons” for every district be transmitted to the president.

Prior to 1900 few Indians are included in the decennial Federal census. Indians are not identified in the 1790-1840 censuses. In 1860, Indians living in the general population are identified for the first time. Nearly all of the 1890 census schedules were destroyed as the result of the fire at the Department of Commerce in 1921.  American Indians in the Federal Decennial Census – 1790-1930

Even Dr. Martin Luther King, Jr. recognized what was going on, yet few paid that any attention.

There is no way I could possible post all the materials available to clarify and open your minds and hearts to truth.  You have to want to know to change the ways of this world.

With that said, know this I am more than fully aware of who I AM…  No paper genocide here.  I will not allow that to continue, say what you will…